Why Does Innovation Matter?

Whether you are a part of an established company, or a startup searching for fresh visions to get to the next level, it is safe to assume that ‘disruptive innovation‘ ranks high in your hypothetical “most-used” vocabulary list.

In fact, the role of toying with and ultimately latching onto innovative ideas is crucial to your company’s success. Business executives rely on the development of new ideas to fuel long-term success.

So, the trial (and inevitable error) of experimenting with new ideas, products, and plans is vital to a business’s growth.

According to Mark Payne, President of Fahrenheit 212, ideas should be “treated not as precious pearls to be polished, but as sparks born of friction”—because “exposing fledgling innovation ideas to the tough love of tough questions … ensures those ideas can survive in the real world of real companies placing real bets with real money.”

Get Started for Free!

🚀 We’d love to learn more about your team and the challenges in your current workflow. Let’s chat!

The Growth of AI

In a post made by Forbes, it is revealed just how quickly AI will grow in the enterprise over the next several years. In particular, a chart of the “revenues from the artificial intelligence for enterprise applications” plots a growth from $1.62B in 2018 to $31.2B in 2025.

These numbers apply to the worldwide market.

With the leaps that have been made in the proliferation and fine-tuning of AI, businesses are presented with new opportunities to maximize company growth–i.e., through innovation.

Research from Accenture predicts that “AI could double annual economic growth rates in 2035 by changing the nature of work and creating a new relationship between man and machine.”

Artificial intelligence systems are able to learn, grow, and adapt, and their efficiency at doing so revolutionizes a company’s productivity, thereby enhancing the innovation process.

AI in business is the way of the future.

Companies that aren’t looking for ways to implement the technology will find it increasingly difficult to innovate. Failing to move forward with the times limits abilities to expand.

Simply put, if you are not with it, you are against it.

AI and Innovation: A Match Made in Heaven

AI as a Catalyst for Innovation

Research from Accenture eloquently highlights the impact of AI on effective innovation:

“AI is poised to drive innovation by accelerating the development of new products. This increase in innovation eliminates redundant costs and generates new revenue streams, thereby increasing profitability … AI is also helping companies to create new products based on design goals and constraints.”

An example provided in the research mentioned above lies in how Berg Health has used AI to monitor the progress of cancers, and has thus been able to discover a new cancer-fighting drug that is estimated to halve the production cost of a single drug from $2.6 billion to $1.3 billion.

Berg Health is not the only company in the healthcare industry that has innovated with the help of artificial intelligence.

In fact, Babylon Health–a virtual health service provider–owes its functioning and success almost entirely to their adaption of AI.

The company’s goal is to provide millions with accessible healthcare stored neatly in an application on their phone, and artificial intelligence has turned this goal into a reality.

Dr. Ali Parsa–founder and CEO of Babylon Health–said the following in a statement:

“Cutting edge artificial intelligence together with ever increasing advances in medicine means that the promise of global good health is nearer than most people realise. Babylon scientists predict that we will shortly be able to diagnose and foresee personal health issues better than doctors, but this is about machines and medics co-operating, not competing.” (TechCrunch)

What’s more, the benefits of AI application are not limited to the healthcare industry. 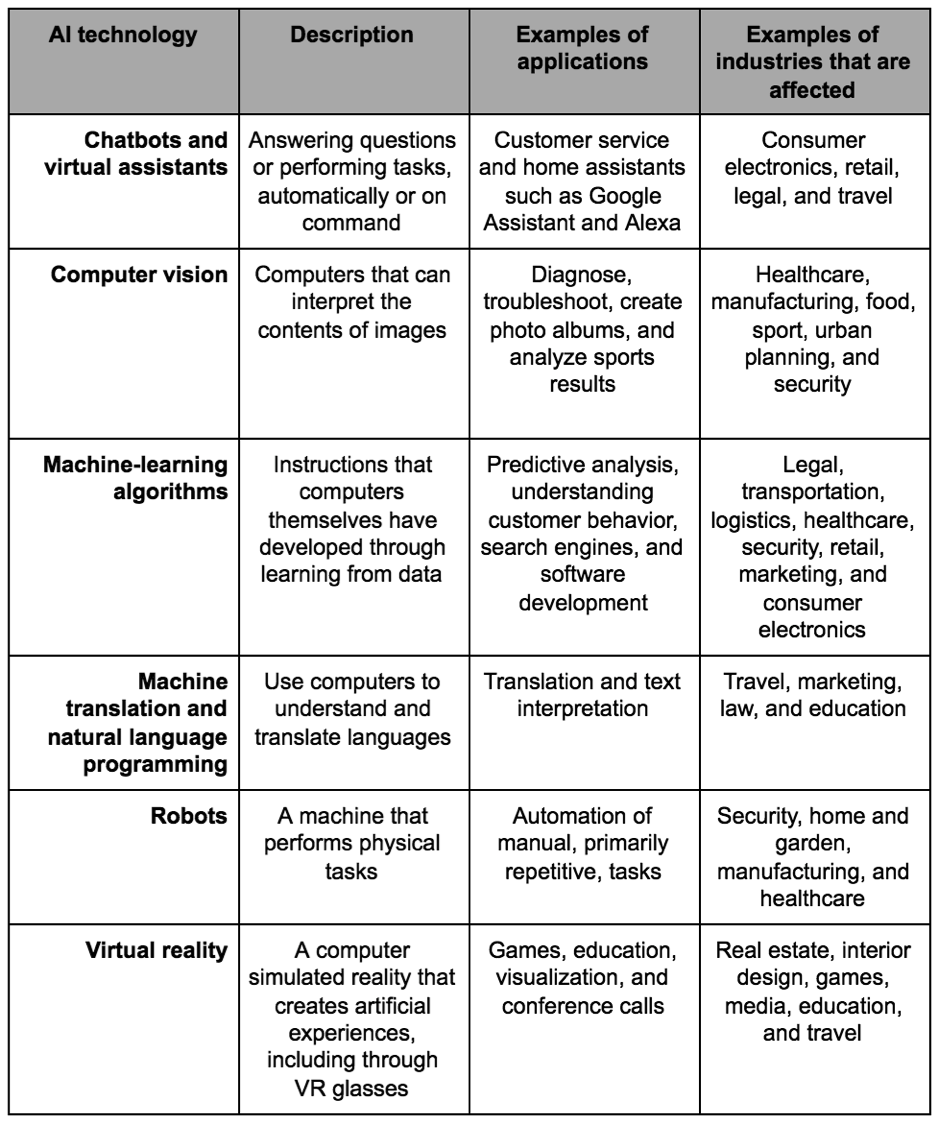 Simply stated, there are no fixed industries, job functions, technology to which the application of AI is limited.

If you are questioning whether or not your company could benefit from AI technology, we are here to assure you it will.

AI as a Promoter for Human Brain Power

When artificial intelligence is able to perform some of the human duties that took time away from sidelined innovative thinking, people are able to spend more time tossing around new ideas to promote company growth.

“The potential to significantly boost the productivity of labor in developed economies will be driven by innovative AI technologies that enable people to make more efficient use of their time and do what humans do best – create, imagine and innovate new things.” (Accenture).

So, with the added convenience and luxury of a man-made technology taking over many tedious and time-consuming operations that are vital to a business’s wellbeing, human brain power can be devoted more to ingenuity and creating new ideas.

Looking To The Future of Business and AI

A post by Quartz highlights the relationship between humans and AI as follows:

“Machines already outperform us on tasks that involve retaining, processing, and repeating rule-based information … What society therefore urgently needs is an entirely new value system for both education and work; one centered around the singular thing robots can’t quite catch up with us on: creativity.”

Raw creativity and innovation cannot be engineered, and the imaginative and experimental nature of humans is enhanced when they are freed up from tasks that artificial intelligence can accomplish more efficiently.

To reword and restate, it is humans with machines, not humans against machines–or vice versa.

Mehdi Miremadi, a partner at McKinsey & Company, further explains the significance of the relationship between humans and AI.

“Human-robot interaction is the name of the game … It will be the most important trend in the near- to mid- term … the next 5 to 15 years,” according to a post on Fast Company.

If AI technology is plotted to grow in pertinence and usage, it would be remiss to overlook how it could not only expand our businesses’ efficiency, but ultimately make our lives easier.

The article highlights, “robots should serve the humans, doing the tasks that are boring, monotonous, or too physically demanding.”

It is not a matter of technology taking over our sacred-held jobs, but rather of it taking on duties we either do not enjoy or cannot physically perform.

Florian Michahelles, the head of the Siemens Web of Things research group in Berkeley, California, notes that “when it comes to creativity and complex, intelligent tasks, this is where humans are superior.”

Technology will never outreach humans in the creative component of business, point blank.

Rather, the opportunity for advancement in the world of AI is expanding, and neglecting that field only limits our own business potentials.

If we want to focus more as humans on experimenting, brainstorming and innovating–the areas we excel most in, where artificial intelligence lacks–then it is in our best interest to take advantage of the services AI is readily prepared to tackle.

“Artificial intelligence … may [serve] as a new general-purpose ‘method of invention’ that can reshape the nature of the innovation process,” a paper written by the National Bureau of Economic Research wrote.

If you are considering taking the leap into the world of AI technology, don’t be afraid of falling into the void. The newfound efficiency of your business–coupled with your desire and freedom to innovate–will cushion you and lift you up even higher.