The days of delivering software via compact discs or internet downloads seem like a distant memory. With the cloud, we now expect software updates to happen automatically, or at least when we click ‘agree.’

The shift to agile software development created new roles, tools, and practices. The disconnected functions of development and operations merged into DevOps, resulting in a collaborative and streamlined way of developing software.

Continuous integration (CI) and continuous deployment (CD) also emerged from this shift. These two terms can be a little confusing to people new to the development field. For one, they both have the same goal – faster software releases. Secondly, they are interconnected. However, these continuous development practices differ in how they facilitate an accelerated time to market.

This continuous integration vs continuous deployment guide will discuss the key differences between these software development practices, their pros and cons, and how one relates to the other.

What is Continuous Integration?

Continuous integration (CI) is the process of building and merging code changes to the main repository as often as possible. With each merge comes a new build and an automated testing sequence to validate the changes.

The software product development process is becoming increasingly complex. It is rare for software engineers to work alone to develop new features or fix bugs. Different team members work on separate parts of the same software code. Furthermore, various teams contribute to the completion of the product in a sort of assembly line.

As a result, various developers integrate or commit their code work into a source code repository. Each integrated code change triggers an automated process of building the software to check for errors.

Below is a simple illustration of how the continuous integration process works:

First, developers commit code work into a source control server, which notifies the continuous integration server of the new commits. Then, the commits are transferred to a workspace in the CI server, where the commits are built, analyzed, and tested for defects.

If the build is successful, the code with the latest changes can move on to the deployment phase. If not, that code is blocked until the programmer resolves the issues. The CI server notifies the relevant parties of the status of the build. In large projects, continuous integration happens multiple times per day.

CI puts emphasis on testing automation, giving developers confidence in their code quality. By validating the new commits as they occur, you avoid the integration issues that come with merging changes into the main code branch. The CI process has already confirmed the changes.

A real-life example of a company using continuous integration is Buzzfeed. In an industry where every second counts, the digital media house uses CI tools like GitHub as a central repository for open code, allowing anyone with access to automatically build and run code.

🚀 We’d love to learn more about your team and the challenges in your current workflow. Let’s chat!

Pros and Cons of Continuous Integration

Here are the advantages of continuous integration

The disadvantages of continuous integration are:

In summary, continuous integration cuts down the integration phase at the end of the project, allowing you to troubleshoot any problems earlier.

However, there are additional IT infrastructure costs, and you will need to set time aside to train and orient your engineering project management team members.

What is Continuous Deployment?

Speed is critical if you want to deliver innovation and responsive customer experiences. Imagine fixing bugs or rolling out new features as soon as they are ready! Unfortunately, many businesses have long release cycles, and customers wait months for updates.

With continuous deployment, the release cycle is shorter. Customers receive updates, features, and bug fixes as soon as they are ready.

Continuous deployment (CD) refers to the practice of automatically releasing codes into the live environment. Each time new commits merge into the master branch, the updated code is tested to ensure it doesn’t break the software. From there, it is released into production, where customers interact with the updates and provide feedback if necessary.

Continuous delivery and continuous deployment are often used interchangeably, but there is a difference between the two.

The illustration below shows this difference. 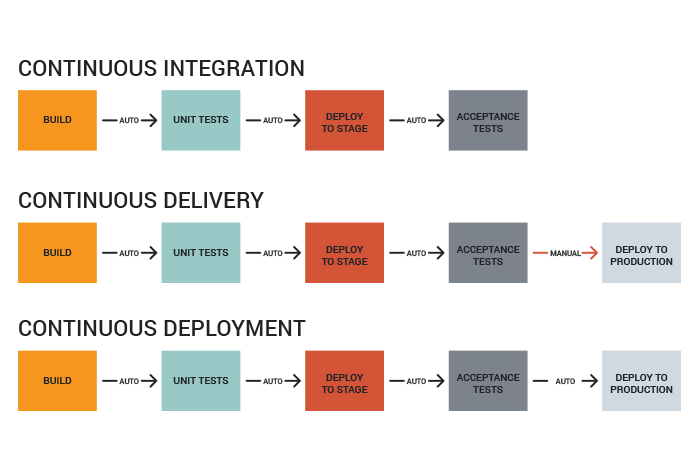 The process of building and testing is the same. The biggest difference between these two is in the release process. Once the code passes acceptance tests, the system automatically releases the updates into the production stage in continuous deployment. In continuous delivery, you deploy the changes manually.

A real-life example of a company using continuous deployment is Etsy. The global eCommerce site delivers app and website updates every 20 minutes with minimal disruption to the operations of those channels.

Pros and Cons of Continuous Deployment

Here are some of the advantages of using continuous deployment

The disadvantages of continuous deployment are as follows:

All in all, continuous deployment allows you to deliver critical bug fixes and features promptly. However, your testing systems must be robust to ensure you release quality software.

How The Practices Relate to Each Other

Now you know what continuous integration and continuous deployment are. Let’s look at how these two relate and differ from one another.

A helpful analogy for thinking about continuous integration vs continuous deployment is the stacking dolls – one builds on the other.

The software production pipeline for both processes begins with CI. CI ends in the staging environment, whereas CD builds on CI and ends in the live stage.

Continuous integration allows organizations to have a supply of deployable artifacts ready for automatic deployment. Depending on your workflow procedures, various manual steps of reviews, approvals, and testing are required before developers can release software into the production environment.

While we recommend CI for modern development teams, CD isn’t suitable for every development project. For example, continuous deployment isn’t appropriate for new features or user experience updates that require buy-in from other departments like marketing and IT support.

As such, CD works best with small and incremental changes.

Gain visibility, from requirement to release.

Modern development teams can deliver critical software updates faster and more efficiently with continuous integration and deployment. These Agile and DevOps practices have similar goals – leveraging automation to facilitate rapid software development. They also enable organizations to respond better to consumer and market trends. However, there are fundamental differences between them.

Simply put, continuous integration and continuous deployment are two levels of the same development. In the first level, you have CI, which builds and tests code changes to features and bug fixes. CD goes further and implements newly developed software codes in the software application. CI puts emphasis on testing automation. CD focuses on delivery automation.

The main benefit of continuous integration is having developed codes ready to deploy when you are ready. A drawback is an investment in new IT infrastructure and training. While continuous deployment offers faster release cycles, it demands rigorous testing and a culture of monitoring to ensure no defects reach users.

The continuous deployment process may be the peak of automated end-to-end software development. However, deploying ready-made artifacts directly into a live environment has its challenges. You need an outstanding testing strategy to ensure codes are well-tested and error-free. Therefore, we recommend you start with continuous integration and incorporate continuous deployment later.

Are you looking for a product delivery platform that supports CI/CD sync with GitHub? Check out Tara AI – a powerful engineering project management software built for software teams. Get started today!